“The most expensive part of building is the mistakes.” ― Ken Follett, The Pillars of the Earth 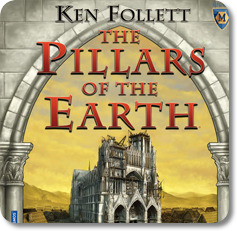 I blogged (Missed it by that much) about getting a worker placement game and finally broke down and picked up Pillars of the Earth by Mayfair Games. Why did I go with Pillars? I enjoyed the book and this helped me with the theme of the game. I also believed that because of the book, I can get those non-gamers to give it a try because when they see the game, they can immediately tie it to something they know, assuming they read the book or watched the miniseries.

I took it to our local game club meetup this week and was fortunate enough to be asked to give it a spin. I have played other worker placement games and they all have there positives, but Pillars is unique to me because drawing the pawns from the bag adds suspense to the game that others don’t seem to generate. Another thought that others shared that have played the game more than me, but I do agree with, is that Pillars lends to tight games. In the final round, all players seem to be in striking distance of one another, no one person seems to have run away with the points. The other night, we were all within five points of one another. I am not saying it can’t happen, just that it seems unlikely.

I have a few observations from last nights game that I wanted to share for those interested in Pillars of the Earth
Anyway, glad we got to play Pillars and hope you consider picking up a copy if you are looking for an oldie but a goodie in worker placement games. If you don’t have time for the book, be sure to check out the miniseries because either will add to your experience with the game. I want to add the expansion as soon as it gets back in stock so I can add two more players to the game.