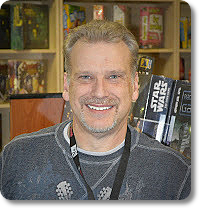 Marty has been a video and board gamer since the Atari 2600 and Uno (both from the 70’s). As a child, he has fond memories of playing all sorts of games with his family and friends. As a parent, he now wants his three sons to have the same great memories of everyone sitting around the table captivated by cards/tokens/miniatures, feeling great about a win, learning how to deal with losses, but having fun regardless of the outcome. Marty did not discover the sub-culture of “geek” gaming until 2000 through the Lord of the Rings TCG. From there, a whole new world of card games, board games, RPGs and miniature wargaming was opened up to him and he dived in head first. As his sons started taking interest in his hobby, Marty gladly cultivated their interest and supported whatever games they wanted play. Even his wife, a non-gamer just a few short years ago, now loves the gaming culture and gets “geeked up” as anyone for board game nights and trips to gaming conventions. Gaming is now a family event. Less time is spent watching TV and more time is spent sitting around the gaming table strategizing, laughing, learning, and building memories that will stay with them for a lifetime. At the same time, Marty is adding new memories of his own. Marty goes by the handle WolfpackEE on Board Game Geek. 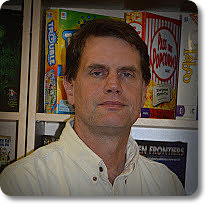 Tony has been playing board games for as long as he can remember. When the summer heat in North Carolina was too much to be outside, games would be broken out. One that was sure to be played was Stratego. Even in later years, games would continue to be a major part of Tony’s life, none more that APBA Baseball and card games. Outside of gaming, Tony enjoys playing all sports but the current favorite is disc golf.  Whenever time permits, Tony will break out a game and play with family and friends and gets great enjoyment out of teaching new games to others.Becoming an empty nester recently in life has him looking for more two players games to enjoy. Tony’s favorite style of games are those that promote a fairly fast style of play and can be done in under two hours. His least favorite games are those that promote analysis paralysis by the players or promote large amounts of downtime waiting on other players. Tony goes by the handle damcree on Board Game Geek.