Every year, Marty hosts a fantasy baseball draft. This group that has been together for 13 years and during that time, I have never won. And while I still enjoy the draft, I have become less than engaged with baseball and fantasy baseball. I remember when I would spend weeks developing my draft sheets, reading about teams and trying to get the latest news. Now, I download projected stats, sort them by position and price and away I go. I know that to win the league, you need to pay attention to baseball and to be honest, I don’t. Watching baseball on TV is painful for me, but love sitting in the stands at a game. 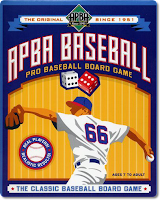 Anyway, what does this have to do with board games. Well, before fantasy baseball, I played a game growing up called APBA Baseball with my friends in the neighborhood. It was our first fantasy baseball experience.  The game was very simple, you needed these special cards representing baseball players, situation boards, baseball score sheets, and two D6 (each a different size or color so you know which was the tens and which was the ones).

The cards of the players mimic their stats from the baseball season so the better the player was, the better chance he had to get you on base, hit a homerun, or steal bases. Pitchers had grades and depending on the grades would determine outcomes on the situation boards for certain numbers. One other aspect of the situation boards was that the team on defense would total up their points and depending on that total would determine how good a team’s fielding was. A poor fielding team would generate more errors where a better fielding team would get an out. 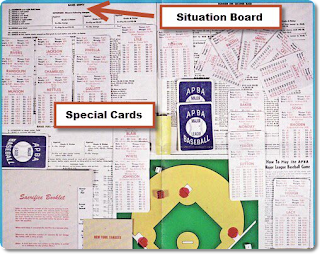 During your at bat, you would roll the dice and look on the player card to see the resulting number. You would then look that number up on the situation board depending on if players were on base and which bases they were on. Also, as the manager, you could tell your players to bunt or perform a hit and run before you rolled and look up the result in another book. You would continue to roll until you made three outs and then it would be the other player’s turn. You would play nine innings of course and the games went very quick.

So, how was this fantasy baseball? Well, every year my friend’s dad would order the previous seasons year and when the teams arrived, we would gather around the table and draft which teams we wanted. So, you had to research how players did that year to determine which teams you wanted to pick. You would then take those players and add them to your roster and of course cut those that no longer able to make the team because we had to keep a roster size of 25. We had Minors, AA, and A teams as well, but they were never a lot of fun to play. What was even better was sometimes my friend’s dad would order teams from the past and I would learn about that season in baseball and I think it was his way of teaching us of a time when baseball was truly the Great American Pastime. 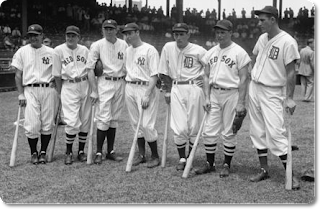 I know APBA is still around and you can order the base game for $22 (currently out of stock). I have no idea how it has changed and I know it is a lot more to it than when we played it. I bought the base game back in 1991 and taught it to Marty. Someday, we will play again because it is truly my first fantasy baseball game.