Episode 6 – Catan: Why you can’t burn your neighbors city 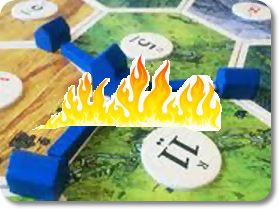 Episode 6 is out for debate. We were lucky enough to have Todd join us for this episode in which we discuss Eurogames vs Ameritrash. To help people have some idea what we are talking about, here are the definitions as found on BoardGameGeek:

Euro / Eurogame n. synonym for German game. This term emphasizes the more frequent publication of German-style games in other countries in Europe.

Ok, that didn’t help as much as I had hoped, so give the podcast a listen and hopefully it will become even clearer.
During the podcast, Todd mentions a book which he read to prepare for the show. That is right, there was actually sources used in the show. That is why we bring on the guests, to help raise the level of this show. Anyway, the book Todd mentions is Eurogames: The Design, Culture and Play of Modern European Board Games by Stewart Woods.

Just remember, that when you are looking at games and think, is this a Eurogame or Ameritrash, you will know it when you see it.