Welcome to Day 9! Has anyone played a new game yet? I need to go back to Day 7 for a minute. My youngest son came home from school today energized to play Pokemon again! Apparently on inside recess days the students can bring their Pokemon cards. They trade and give away cards. He spent the afternoon putting his cards in protectors and we will put them in a binder for him to take to school. Ahhh….collectible cards.

Today I am going to talk about one of my favorite types of games, Cooperative  or Co-Op games. I mentioned co-op games in Day 4: Gateway Games. Cooperative games are when the players work together to beat the game. We talked about Pandemic and Flashpoint. Cooperative games are one of my favorites because I do not have a competitive spirit (another reason I wasn’t good at basketball !). I like playing together with my family and friends. It is exciting to play and get to the end of the game and bite your nails wondering if you will win! 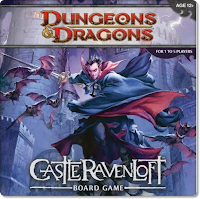 After playing Pandemic the next co-op game I played was Castle Ravenloft. Ravenloft is a fantasy theme. The Castle Ravenloft is full of evil monsters, villains, and traps. The players are heroes and must work together to fight monsters, solve the mysteries, and uncover treasure! This is a fun game to play during October. It is recommended for ages 12 and up.  The players or heroes in Castle Ravenloft were my first introduction to characters such as cleric (priest), rouge (thief), wizard, and warriors. It was fun playing with my family because everyone liked the character they chose. We dressed up as a group that Halloween. There are 12 different scenerios to play through before the game is finished. Each scenerio lasts about 60 minutes. Matter of fact, I don’t think we finished it. We got sidetracked with other games!

Another cooperative game I like is Elder Sign. Elder Sign is a game that is part of the Cthulhu Mythos. Cthulhu is a creature from literature written by H.P. Lovecraft.  H. P. Lovecraft was an author in the early 1900’s. His short stories and poems and have spawned a sub-culture of games, art, literature, and merchandise. The games are SO MUCH FUN! In Elder Sign the year is 1926 and players are investigators working to close portals between our world and other dimensions. This is another fun Halloween game. It also is recommended for ages 13 and up and playing time is 90 minutes.

My favorite co-op game is another one from Cthulhlu Mythos. It is Arkham Horror. Here is a picture from the set-up! Playing time is 3-4 hours! What a game! Just as in Elder Sign the year is 1926 and players are investigators. The characters are the same between Cthulhu Mythos games. If there is a character you like you can play as that character in multiple games. In Arkham Horror investigators are exploring a city and trying to prevent portals from opening and fighting otherworld monsters. 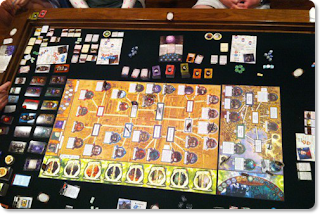 Halloween is a great time to try some of these games. You can find other co-op games online. Ummm….what will we play this weekend?