Hello Tuesday! I like Tuesday’s because Agents of Shield comes on! Good show! But this blog is about good games! Today is deck building games! Let me go back to yesterday’s post for a minute. I totally forgot to mention Lord of the Rings collectible card game. That is the first strategy game Marty played. He started playing Lord of the Rings about 12 years ago. He would have a monthly gaming night to play with his friends. We have been having monthly gaming nights since then! 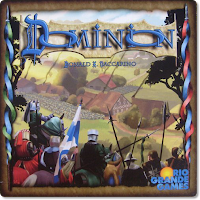 On Boardgamegeek.com they list Dominion as the #1 deck building game. That happens to be the first deck building game I played about five years ago. In Dominion players start with a basic deck and buy cards to build a more powerful deck. The player with the most victory points wins. The classes of cards are victory, curse, treasure, and action. The game has a medieval theme and playing time of 30-45 minutes. It is recommended for ages 10 and up. This is an easy game to understand and fun to play. It is recommended for 2-4 players or up to 6 players if you have the expansion. 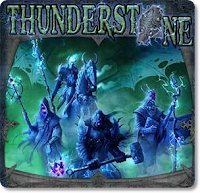 Thunderstone is another deck building game. Like Dominion, in Thunderstone players start with a weak deck and acquire more powerful cards as the game progresses. Thunderstone is a fantasy based game with the cards being Heroes such as mages, archers, thieves, or warriors. Players use their cards to attempt to defeat monsters from the dungeon deck. It is recommended for ages 12 and up with a playing time of 60 minutes. 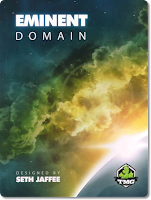 My favorite deck building game is Eminent Domain! I like the components of the game. It comes with little space ships! While Eminent Domain is considered a deck building game the focus isn’t building the deck, but using your deck to survey, colonize, trade, and use technology to expand your civilization. Sometimes you use warfare and that is where the super duper space ships come into play! This is just one of many great games for space lovers. It is recommended for ages 12 and up. Playing time is 45-60 minutes and recommended for 2-4 players. Fun game!

You can find detailed descriptions of these games or any game on Boardgamegeek.com. See Sunday’s post for other review resources. Also, Boardgamegeek.com has a list of their top 10 recommended deck building games. These three are on the list and the only ones from the list that I have played. If you like card games and are looking for something different try one of these games!