I hope that everyone has learned something about different genres or types of games. That is the way the game is played. There is something for people who like dice, cards, role playing, and collecting. Along with how a game is played there is the theme of the game. The theme is the setting or story of the game. Of course all games won’t fit neatly in a category. For the most part there are five themes fantasy, sci-fi, historical, steampunk, and literary. 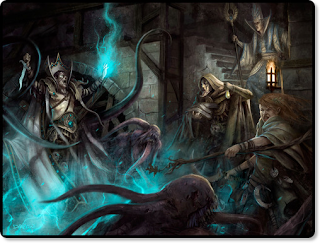 Fantasy themes are very popular in gaming. Fantasy uses magic and supernatural as the setting. It is an imaginary world with magic and mystical creatures.  A medival setting is often used in fantasy games. Fantasy has been used in gaming for many years but Lord of the Rings has increased the popularity of this theme. Some characters in fantasy gaming are thieves, rouges, mages, dwarfs, elves, wizards and creatures limited only by imagination!  Weapons used in fantasy gaming are bows, staffs, (Napoleon Dynamite had those skills) knives, or magic spells and potions. I am going to list the types of games we have discussed that have a fantasy theme. Remember, there are endless games with this theme! Just use your machine (that is what my Mom calls the computer) and you can find games of any theme! Here are some fantasy games that we have played.

Collectible Cards – Lord of the Rings and Magic

October is a great month to talk about gaming because it so easy to dress up as characters from fantasy or any other themes we will discuss and have a Halloween party! By the end of this week we will finish discussing the themes so that will give you plenty of time to put together a costume, buy a new game, order pizza, have your friends over and party like a gamer!!! Maybe fantasy isn’t your favorite theme well hold on to your light sabers tomorrow is Science Fiction! Cue Star Wars theme and fade out…..