There are three types or categories of games that are generally accepted. They are party games like gambling easyslots.com games, gateway games, and strategic games. Today we will discuss party games. Party!!! Who doesn’t like a party? Parties are a time to connect with friends and family, watch a football game, celebrate birthdays and special occasions, and eat! Party games are games that can be played with a group of five or more, have minimal set-up and rules, and usually have a quick playing time. Basically, you can pull out a party game at any get together.  You can play during half-time of a football game or during the game depending on your team!

Here are some party games you are probably already familiar with Pictionary, Scattergories, Cranium, and Charades. You can probably think of many more. For this post I would like to introduce you to a few party games that you  may not be familiar with: 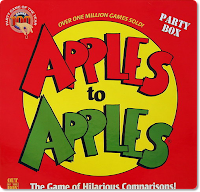 Apples to Apples: Apples to Apples was released in 1999 by Out of the Box Publishing (it is now published by Mattel). It is designed for four to ten players and play time last for 30-60 minutes. Players are dealt red apples (cards) with nouns written on them.  Each player has a turn being judge who turns over a green apple (adjective card). Players choose a noun card to best match the adjective and the judge chooses the best card. This is a subjective game that can turn very silly and very funny very fast! There have been expansions and a junior version released. 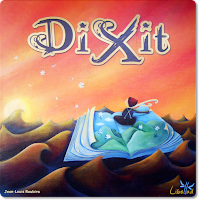 Dixit:  Dixit is a beautifully illustrated party game. It was published in 2008 by Asmodee. It is played with 3-6 players and last about 30-45 minutes. The cards are miniature pieces of artwork. Each player has a turn being the storyteller. As storyteller you choose a card (not seen by others) and make up a word or short story describing the card. Everyone else chooses one of their cards to match the word or story. The cards are shuffled and everyone guesses if they can determine the storyteller’s card. Given the beautiful and unusual artwork, sometimes the stories are very creative! There are also Dixit expansions for even more play! 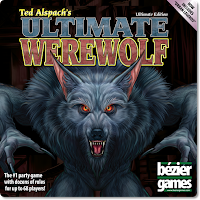 And now for the Halloween portion of this post! It is October after all! A must play game this Halloween is Werewolf! Please play Werewolf! Everyone who has played Werewolf has enjoyed it. We have played this game with our family aged 6-74 and everyone likes it! Ultimate Werewolf was published in 2008 by Bezier Games. Werewolf is a card game for several people. The more the better. Players are either villagers or a werewolf. The game is trying to figure out who are the werewolves while the werewolves try to bluff the villagers. Every night the werewolves come out and eat a villager. There is a moderator who “controls” the game. This game would be fun to play outside around a firepit. There are additional characters to play if you have a really large crowd.

These are just a few party games to try. We have played all of these and enjoy them for a fun quick game. We have played Werewolf with our families and with large groups at conventions in Vegas right before going for the first time in group to nascar and betting on the drivers, some of us even went online to do our fantasy nascar teams here https://www.fanduel.com/fantasy-nascar. If there are some party games you enjoy please leave a comment and tell us! Tomorrow we will look at some gateway games! See you then!