I mentioned earlier in the month how gaming has sparked other interests for us as a family. It isn’t just about playing our game once a week. Gaming has introduced us to new hobbies we never would have considered. Once you start playing games and try new games you find that you develop other interests. One hobby my family has started is painting. 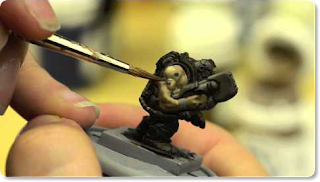 Now I NEVER would have thought that anyone in my family would have the desire to paint. They showed no interest in painting at all. They liked paint by numbers and watercolors when they were young but that is as far as it went. Now when they saw the game Warmachine by Privateer Press it was like a light shining down and heavenly music playing. It was Liz Lemon saying “I want to go to there”! They wanted that game bad! They wanted to collect figures and build their faction. They wanted to paint people! They jumped right in and studied types of paint and painting techniques. They spend hours painting small figures. It isn’t just my family though. Our friends also paint miniatures. People who haven’t thought about painting suddenly talk about shading, dry brushing, and washing. You see the goal isn’t just to use the miniatures in the game, but to have the best looking faction! When they go to tournaments they enter their figures in painting contests then play the game. Special cases have been ordered to store their figures in. We also have a curio cabinet just for figures! Oh, and my son did win third place in a painting competition!

We have also taken a painting class as a family at one of the conventions we went to. While I don’t paint miniatures, mainly because I cannot keep my hand steady, I do like to paint waterguns, nerf guns, binoculars, etc.  for steampunk costumes! Three years ago I would have never thought of painting. Then my family started  and I thought if they can do it I can too! And guess what? We are doing more things as a family besides playing a game.

It is exciting when young people try new things and discover hidden talents. That goes for grown ups too! Shake things up and try a little painting!

PS…for those of you who have left comments, Marty and I have been trying to respond but for some reason it does not post. I am sorry! Mike, if you’re still there, Eminent Domain is the way to go! It is not head to head warfare. That is just one way to acquire a planet. Your wife will like it!