Oh goodness! I wish I didn’t have to work and could just sit and write all day about Steampunk. It is my current favorite everything! (except my family of course 🙂 ) I want to move into a town where everyone just lives steampunk. I often find myself  reading steampunk books, dreaming over steampunk clothes, watching League of Steam web series, drooling over steampunk jewelry and daydreaming about clocks, gadgets, and gizmos!  So what is steampunk? 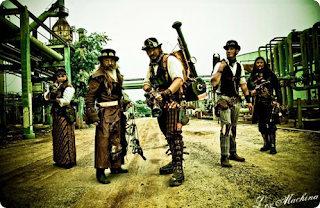 Steampunk has several definitions and like Science Fiction essays and papers could be written on the topic.  This is my personal defintion when I describe it to my friends: Steampunk is alternate history which takes place during the Victorian Era and technological advices are powered by steam. The setting is most often London, England or the American Wild West but is actually worldwide. Steampunk takes historical events and figures and creates a different history! Fantasy creatures such as vampires and werewolves also find their way into Steampunk. Steampunk is actually a sub-culture! I could write 31 days on Steampunk, but this is gaming!! Gaming introduced me to Steampunk. We were at  a gaming convention and I saw these wonderful costumes and asked what it was. My son told me oh that’s Steampunk and I was hooked! Thank you gaming world, again!

I am learning through these blogs that we have been very one sided in our gaming themes. We play all different types of games, but most seem to have a fantasy theme. In thinking of what we have played, I haven’t played any Steampunk games! Shocking! I had to look to Boardgamegeek for help. This is the list of their top ten Steampunk games:

We are in the early XXth century, but the world is not as we know it. In 1895, exploring Amazonia, Auguste Copperpot discovered a gate to a lost valley, occupied by a primitive civilisation. Wiraqocha Valley was the name he gave to this remote Eden. This world enclosed a treasure that was going to revolutionize modern sciences, namely the Somnium, an orange luminescent crystal showing amazing properties. It can be used as fuel, affects matter and even time. Immediately, this virgin land became a new Eldorado for European colonists. Empress Victoria II decided to send several conglomerates to share this promised land and reap the fruits to her benefit. Zeppelin fleet, full of scientists, adventurers and looters, clouded the Atlantic sky.

Wiraqocha Valley is represented by an adjustable board consisting of 22 hexagonal tiles, each of them being identified by a number from 1 to 12, or a dice combo (pairs or straights). In his turn, each player rolls some six-sided dice, combining them to take possession of territories, or to protect from the opponents the ones he already owns. Every hexagon affords resources or special capacities, which are means to influence die results to fit one’s strategy. There are three ways to win: bring back a huge cargo of Somnium to the Empress; acquire enough scientific knowledge to build the Leviathan, a terrifying weapon serving the Kingdom; or find in the temple depths the four relics that will allow you to reach
Wiraqocha’s treasure. 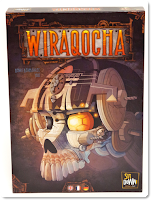 Grind – Dice (this is a steampunk sport game)

As I am ready to post this blog I realize that I was not dreaming. I was in the year 1895 with H.G Wells and his time machine. He took me on a whirlwind journey through ten steampunk games! Here I thought it was the am, but it is pm when this blog is posted. I do apologize! I even missed my tea!