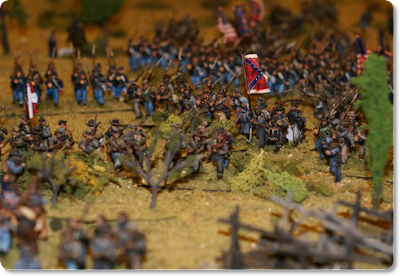 In case you are wondering miniature gaming is not gaming for toddlers and it is not miniature sized games! It is games played with manipulatives that are miniature figures, planes, tanks, ships, or just about anything! If you have a painter in the family or a history buff then listen up! These may just be the games you are looking for! 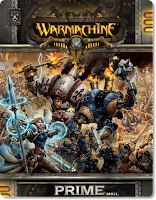 One of the biggest miniature games right now is Warmachine. While I do not play Warmachine my family does and I like the storyline. It is a steampunk type story and I like steampunk! (a future blog :)) There is also a RPG based on Warmachine called Iron Kingdoms that I do play! So how does miniature gaming work? In Warmachine there are figures that are collected, assembled, and then painted. These figures can be super small and there is a lot of detail to the painting! Very tedious! At a convention in 2010 my family saw this game displayed and they were hooked! Now no one had EVER painted ANYTHING! But they were hooked and have been assembling and painting ever since! This game literally brought out a desire and a growing talent in painting.

After the figures have been painted there are a set of rules and players follow the rules to combat one another. Each figure will have different responsibilities and skills. My husband and oldest son have gone to tournaments and entered figures in painting contest. 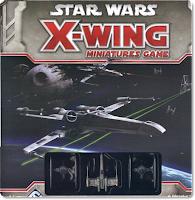 Some miniature gaming does not require assembling and painting. If you or someone you know is a Star Wars fan then you may want to try Star Wars: X-Wing Miniatures! This game comes with completed miniatures and players re-create Star Wars space combat! Wings of Glory has World War I and World War II miniature planes. These games are generally suggested for ages 12 or 14 and up. If you know someone younger who may enjoy using miniatures HeroClix and HeroScape are also popular miniature games. Players collect different superheroes to use in play against each other. These games are recommended for 8 and up. My younger two children have played both of these games with each other and their friends.

Miniature gaming definitely incorporates hobbies in it’s play!  I have been amazed  to see how my family has started painting when they were never interested before. We have set up a painting table and they take a few hours here and there to paint together and talk. It is so wonderful to see especially when our oldest will be gone to college next year. Sniff Sniff. Miniature gaming has provided memory making hours for us. Those hours could have been spent playing videos games, out with friends, or just doing our own thing. Miniature gaming is a hobby game; painting, collecting, or history buff. And with these hobbies families grow closer!