October is flying by! I can’t believe we are on day 10 already! I hope you are enjoying TheNester’s 31 day series or if you have joined us from Rolling Dice & Taking Names I hope you’re finding some information helpful. My goal is for families to get involved in gaming together. I know there are some families where maybe one person games and the other doesn’t. That is how it was for years with Marty and me. He would have his friends over and they would play the Lord of the Rings card game. Our family would play party games then we played gateway games for a few years. After going to GenCon (gaming convention held in Indianapolis) in 2010 that is when we started gaming together as a hobby. One type of game that hooked me was Roleplaying Games.

Roleplaying Games (RPG) are somewhat similar to cooperative games because players are working together for a common goal, HOWEVER, in RPG’s the game is run by a player who is the Game Master or Dungeon Master if playing Dungeons & Dragons. Yes, I said Dungeons & Dragons! It is not the horrible game that the 80’s made it out to be. It was written by a Christian, Gary Gygax (I will discuss Gaming and Christianity during our Sunday chit chat).

RPGs use a game master to tell the story of the game. Players choose characters and work together to explore, look for treasure, solve clues, gain knowledge, and fight an antagonist! In RPG’s the game master (GM) will guide the players through the game telling the story as it unfolds. They also play the role of the antagonist when in combat. For instance a player may ask, “Can I look inside this crate?” The GM would (or would not) grant permission and then when looking inside a dice roll would determine if the player kept what was inside! (assuming it was something good!) In a combat both the players and the antagonist will roll dice to determine who wins and the amount of damage. In RPG’s you have to have an imagination and try to see what is happening. Often a GM will have props to use during the game. A  RPG is also different from co-op because it takes several sessions to complete the story. Think of it as a play. In a RPG instead of play it is called a campaign. A campaign is a set storyline that has an ending. A play is divided into scenes. A RPG is called a session. Each session can last up to four hours! Of course not all campaigns are that long! Remember when I said that some games have rule books? That is role playing games. Each game or system has it’s own set of rules. Systems will come with pre-written stories that you can purchase, but the most popular is when the GM creates the story! 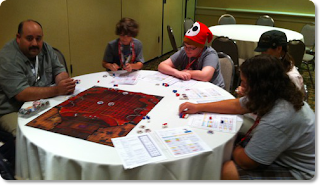 There are different systems to use when playing a RPG. Dungeons & Dragons is perhaps the most well known. My 13 year old plays Pathfinder. Both of these are fantasy based so they have a definite theme. We have played Savage Worlds several times. Savage Worlds does not have a theme so the GM can create any storyline.  It is a time for sometime to become a writer and story teller! One RPG we have enjoyed as a family is when our friend Heath comes over and he is a GM using Savage World rules. He has created several Lego RPG’s! We could play for hours using Legos! His story’s or campaigns are always fun!

Roleplaying Games are very imaginative! It really is like writing a play and then “directing” the actors! They are also very rules oriented. For someone who likes detail and telling a story RPG’s are a great game! My family has both been players and GM’s. I have not branched into being a GM but I do love playing with them!